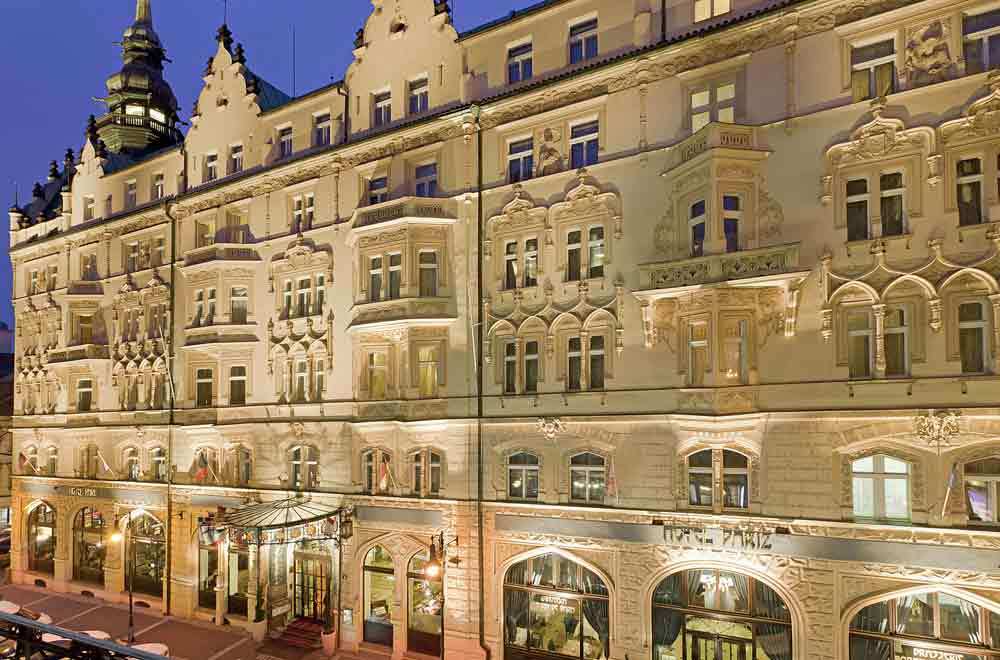 WHY WE LOVE IT: Located a short walk to Prague’s Old Town Square, the Hotel is an architectural treasure in the Art Nouveau style.  It’s family owned, with updated modern rooms and we love walking into the hotel and feeling the golden age of travel.

“The Hotel Paris Prague was built by the renowned architect Jan Vejrych in 1904. The interior of the hotel was designed by the architect Antonín Pfeiffer, and the ceramic mosaics which were employed in particular for decoration of the hotel restaurant proceeded from the workshop of Jan Köhler. The Hotel Paris Prague has retained its unmistakable appearance of a pretentious neo-gothic building with Art Nouveau elements for more than one hundred years. Until the end of the 1950s, the Hotel Paris Prague, together with several more buildings, was considered a symbol of the success and wealth of the city of Prague. In 1984, the hotel was declared a historical monument, thus rightfully joining the most prominent Prague monuments. After the Velvet Revolution, the hotel was returned in 1991 in the restitution process to its original owners, the Brandejs family. An apt description of the Hotel Paris Prague can be found in the well-known book of the writer Bohumil Hrabal “I Served the King of England”. The protagonist describes it to us with words full of admiration and respect: “The Hotel Paris is so beautiful that I was beside myself with it. So many mirrors, so many brass rails, and so many brass candelabras so highly polished that it resembles a golden palace.” The elegant Hotel Paris Prague is decidedly the right place in Prague’s Old Town to furnish you a lot of luxury and comfort, even if you are far from your home. We are looking forward to your visit!”

Stay in this beautiful hotel and visit the historical and architectural gems of Prague on our following vacations: